Hey! My name is Nick and i’m a full time amazon FBA seller. I have spent a lot of time trawling through the different amazon fba Reddit communities.

There are some golden amazon fba “sub-reddits” brimming with information and valuable content.

Today i’m going to run you through my top amazon fba Reddit communities.

I’m also going to run you through some of my favorite amazon fba reddit threads.

Think of this article as a amazon fba reddit guide.

Towards the end of this article i’m also going to talk to you about how you can grow your business using the power of reddit, so make sure you read to the end 😉

Reddit is a hugely useful resource for anyone wanting to learn about a particular niche or topic.

A lot of people refer to Reddit as the front page of the internet.

So if you have an Amazon FBA business, which Reddit communities should you know about?

On Reddit it seems like people are more willing to run through the inner workings of their amazon fba business.

This is why i like Reddit so much, people seem to be very generous with their time and information!

So for me, the number amazon FBA reddit community is https://www.reddit.com/r/FulfillmentByAmazon

/FulfillmentByAmazon is a great community, it’s a beehive of sweet information and seller experience. 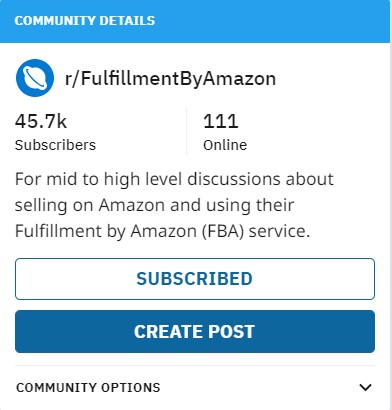 At the time of writing this sub Reddit has over 45,000 subscribers, it’s basically a mini forum for all things Amazon FBA.

I started this thread and it became pretty popular, it’s basically just a Q&A of me answering a load of questions 😀

This amazon fba Reddit has been incredibly useful, it’s helped me generate a load of useful content ideas.

Now although this isn’t a specific amazon fba Reddit, it does include a LOT of useful amazon related threads.

It covers business and entrepreneurship as a whole, I’ve found it really useful from a networking perspective too. 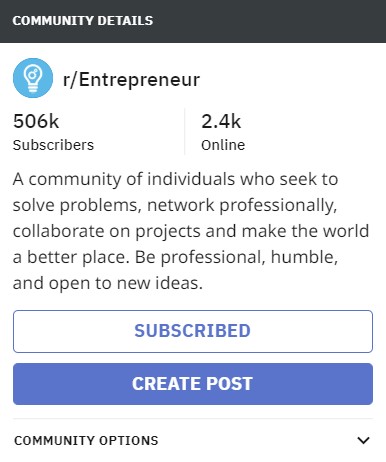 Again at the time of writing this community has more than half a million subscribers.

For me it’s another useful amazon fba Reddit to keep an eye on.

There is a lot of successful digital marketers in this community, it’s a great place to learn from some of the best.

This is my favorite thread from this community.

The thread runs through all the things you need to consider when starting your own amazon business, it’s well worth checking out.

From what i can see both of these amazon fba Reddit communities are ran by people based in the US.

The majority of the group members seem to operate in the US Amazon marketplace.

I’ve been obsessed with reddit for over a year now, the communities are full of useful information and experienced people.

I have decided to set up my own amazon fba reddit, i think its a great way to build up a community of like minded people.

I’ve set up this reddit to build on our community of amazon sellers.

I have spent a lot of time answering questions and running Q&A’s in a lot of the other amazon fba reddits so this just makes sense to me!

Reddit is a great platform for building communities, by building my own amazon fba reddit i can keep all of the useful information in one place.

If you are interested in Amazon fba, join the community and start asking questions! (just click the above image to find amazonfbahelp).

So let’s run through some of the best amazon fba related threads I’ve found on Reddit.

When i say the best, i’m talking about the ones that i think hold the most value for anyone interested in amazon fba.

Obviously the value of a thread is going to depend on your personal situation and experience on the amazon platform.

Anyway, these are some of the best and most interesting in my opinion.

We all know about fake reviews on amazon, hey some of you may even have some yourself.

This thread is on the /r/ FulfillmentByAmazon sub Reddit and i found it fascinating!

Some sellers simply don’t care about the threat of account suspension, for me as an amazon seller i want to sleep well at night.

This thread exposes the very real community of amazon sellers that manipulate reviews and rankings for their own benefit.

I found the thread fascinating because of the in depth research the writer has gone into.

They run through evidence of a Chinese company (that’s right they name them) that looks to be using tricks to insure of a constant flow of countless, verified five star reviews.

There are a lot of sellers that can just create accounts on demand, maybe this is why they aren’t too concerned about the risk of the account being closed down.

Amazon is big business, a lot of these sellers are making A LOT of money by manipulating amazon’s platform.

I think amazon know that they have a very real problem on their hands, i’m sure in the long term businesses like these will not succeed…

Amazon’s reputation is based on the trust that the customers have for their platform.

The quality of the product won’t matter if a seller can obtain thousands of verified five star reviews.

My advice on this is to avoid black hat strategies.

Be in it for the long term… only the best will succeed in the end.

If you are an amazon seller i’m sure you’ll find this thread fascinating.

It documents the very real problems big volume sellers come up against all the time, some of the issues this person has faced are eye opening.

This seller details his exact business set up and from an amazon seller perspective i found it very interesting.

The link to this thread is below.

It’s not as rosy as you might think, the seller takes $50k a year for himself and has a manager that’s on £80k a year.

I actually think this seller might be going in the right direction, if you are prepared to live as basic a life as possible your business has a very real chance of succeeding.

Sure it’s inspiring in some cases but i think it’s only right to look at all the bad things that can happen too.

This is also the reality of building any sort of business, on the face of things everything looks amazing but there are real difficulties you can and probably will come up against.

I mean we faced one problem a while back that cost us in excess of £100,000 – The video below runs through what happened to us.

Ok this one DID NOT make me cry, let’s just get that out of the way first.

This has to be my favorite Reddit thread to date and yer mainly just because its’ nice.

I’m not crying you are…

Here’s a link to the thread, the comments are just as heart warming!

This generation of customers won’t last forever, i can’t imagine receiving a thank you letter from one of my own customers, maybe i should look at selling VHS players…

Hopefully you’ve found this article interesting and useful so far…

As promised i’m going to show you how you can grow any business by using Reddit.

Reddit is basically a huge collection of mini forums, it contains pockets of people that are interested in particular niches and topics.

So how can you use it to grow your business?

You can use Reddit to help you grow your audience.

The biggest mistake people make with Reddit usually stems from a selfish way of thinking.

I mean that in the best way possible, you need to remember that Reddit is a community of people just like me and you.

Would you like being involved in a community where strangers tried to sell you things constantly?

Use Reddit to engage with people in your niche, in the following video i talk about all of this in a little more detail.

Try and build relationships with people within your community, yes Reddit is a valuable source of niche relevant information but it’s also a great place to network.

When i’m engaging with people on Reddit i like to offer as much free value as possible.

I like to spend time answering peoples questions and doing my best to help them in some way.

If you focus on helping people you don’t have to worry about selling to them.

If you help people out they will want to return the favour in some way, it’s just human nature.

I have gained A LOT of followers on both Instagram and YouTube just by taking the time to help people out.

If you are genuine and helpful, people will ask for more information about you and your business.

You can become a useful resource for people in your niche (That’s me below). 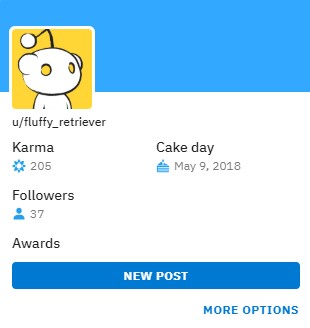 If you start to build a community of people you have helped can you imagine what they would do for you and your brand?

This is the best piece of advice I’ve ever received…

“Help people out and expect nothing in return”

It sounds crazy but if you are in business for the long haul this is the best stance to take (in my opinion anyway).

I hope you’ve found this article valuable, jump into the comments below and let me know what you think.

More from me soon.